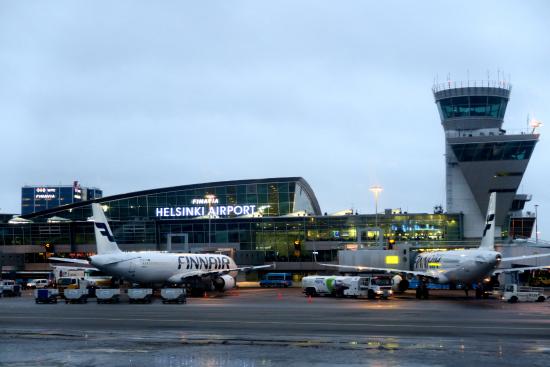 Starting in July, the airport buses at Helsinki Airport has been fuelled by diesel manufactured wholly from waste and residue. Finavia – a limited corporation owned fully by the Finnish state, which is responsible for maintaining and developing its 21 airports and Finland’s air navigation system – started a gradual conversion to using renewable diesel in all buses travelling between the terminal and aircraft at Helsinki Airport. It is also Finavia’s goal to encourage other companies operating at its airports to use renewable fuels.

“All air and land freight forwarders operating in the terminal area will have access to renewable fuel at the distribution station located inside the airport’s fences”, explains Mikko Viinikainen, Finavia’s sustainable development director.
Transitioning to renewable diesel – Neste MY Renewable Diesel – is part of Finavia’s long-term climate programme, which aims at reducing the carbon dioxide emissions caused by the operations of all the company’s airports to zero by 2020. For Finavia, giving up fossil fuels in airport buses and building a solar power plant on the roof of terminal 2 are key actions for gaining pace to reach its ambitious climate objectives for 2017.

Finavia has chosen to use a renewable diesel that is promised to reduce the greenhouse gas emissions produced during the life cycle of the fuel by up to 90 per cent. The diesel is produced in Finland by Neste and manufactured entirely from waste and residue, such as animal fat.

The Finnish corporation is a pioneer in this transition, since few airports in the world use renewable fuels. However, Finavia is determined to expand the scope of this work even further. The next step is to investigate the possibility of transitioning to renewable fuels at the biggest airports in Lapland.

Moreover, the company is hoping that there will soon be renewable fuel on offer for all equipment used at the airport. Viinikainen has this to say to fuel manufacturers: “Besides airport buses, we are also looking forward to reducing emissions from machinery and engineering vehicles, and therefore we are hoping to also access renewable motor fuel oil.”

“Helsinki Airport is a pioneer, and it has ambitious goals to reduce its greenhouse gas emissions. We are happy to be able to help Finavia to reach its goals. Airport buses can start using Neste MY Renewable Diesel without any vehicle modifications and, therefore, they have immediate access to the benefits of the product,” says Sam Holmberg, Vice President responsible for Neste’s Marketing and Services business area in Finland.

Neste MY Renewable Diesel is fully compatible with current diesel grades, and it can be added to the fuel tank even if there is conventional diesel already in the tank. “In terms of all of its properties – the Finnish giant claims – Neste MY Renewable Diesel is better than or at least as good as the world’s leading fossil diesels, and places significantly less burden on the environment. Its leading properties ensure cleaner combustion and reduce engine noise and local emissions”.