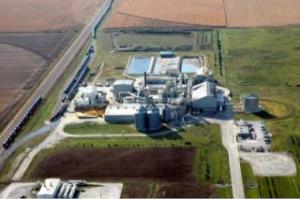 Abengoa, the Spanish sustainable technologies company, has started operations at the demonstration plant that uses waste-to-biofuels (W2B) technology. The plant has a capacity to treat 25,000 tons of municipal solid waste (MSW), from which up to 1.5 million liters of bioethanol will be produced for use as fuel.

The demonstration plant in Babilafuente (Salamanca, Spain) uses W2B technology developed by Abengoa (7,089 million euros sales in 2012 and 90.6 million euros/year of investment in R&D) to produce second generation biofuels from MSW using a fermentation treatment and enzymatic hydrolysis. During the transformation process, the organic matter is subjected to various treatments to produce organic fiber that is rich in cellulose and hemicellulose, which can subsequently be converted into bio-ethanol.

Furthermore, Abengoa’s technology is not just limited to treating the organic fraction of MSW but also enables the remaining components to be used, whether recyclable, non-recyclable or other plastics, by means of different technologies to obtain biodiesel and to recover energy to generate steam and electricity.
The new plant incorporates the infrastructure of the biomass plant that has been run continuously for more than 6,000 hours in order to validate the technical and economic viability of the technology. This is an innovative treatment that represents a revolution in the management of MSW. The design allows the plant to be operated flexibly in order to assess the performance and costs of different configurations.

Abengoa has spent years working on a solution that will efficiently manage MSW while also producing energy in a sustainable way. As a result of its work in this field, Abengoa has proprietary technology for producing bioethanol using biomass as the raw material, from different sources. The technology has been successfully proven at its pilot plant in York in the US state of Nebraska (in the image), and at its demonstration plant in Salamanca (Spain).
“The energy model currently in existence in Spain – says Felipe Benjumea, chairman of Abengoa – cannot be sustained over a long period of time. It is based on an 80 % contribution from fossil energies; practically all of which are imported. This dependence on foreign energy sources represents a serious burden for the trade balance, security of the energy supply and therefore poses a threat to national security. Even more powerful is the fact that fossil fuels are the main cause of global warming and climate change. For all of these reasons, the European Union has embarked upon the path towards a renewable energy-based energy system, and Spain has undertaken a commitment to obtain 20 % of its energy from renewables by 2020. Likewise, in its “Energy Roadmap 2050”, the European Commission has defined a much higher level of penetration of renewable energies for the following decades”.