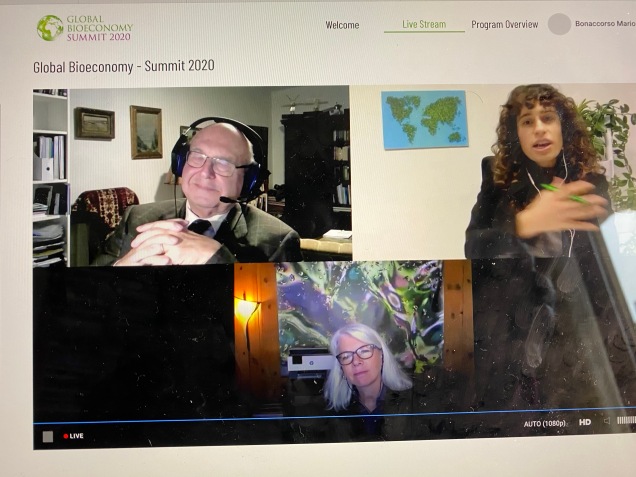 Berlin is the world capital of bioeconomy. Approximately 3,000 participants from all over the world are taking part today in the Global Bioeconomy Summit 2020. That Summit takes place from November 16 to 20, guided virtually from the German capital city. Germany’s partners are ASEAN/Thailand, Japan, Latin America, East Africa and – of particular importance – the EU Commission.

The German Federal Minister of Education and Research Anja Karliczek opened the Summit today together with the Deputy Prime Minister of Thailand. They emphasized the importance of global cooperation for sustainability and the innovations needed to drive this forward. The German Federal Minister of Food and Agriculture Julia Klöckner, UN leaders, as well as ministers from numerous countries will speak at the summit. The bioeconomy is in demand and is increasingly penetrating the economy.

The organizers of the summit issued an urgent appeal to accelerate the global economic system into a sustainable bio-based system. In its Communiqué, the International Advisory Council on Global Bioeconomy (IACGB), which is organizing the Summit, set out the means by which this can be achieved. Council Co-Chairwoman Professor Christine Lang emphasized that the bioeconomy can no longer be reduced to the production of individual sustainable products.

“Resource-conserving processes that are oriented towards the cycles of nature are increasingly being integrated into existing industrial structures or form the basis for completely new business concepts. “There is a sense of urgency to move into sustainable bioeconomy. Nearly 60 countries made amazingly rapid progress in bioeconomy, adapted to local conditions, for example with sustainable high-tech solutions for agriculture, and innovative use of wood,” noted Professor Joachim von Braun, Co-Chair of the Council. For Council member Dr. Julius Ecuru from Kenya, the bioeconomy in Africa is developing its greatest potential in the area of food: “In developing countries, people are threatened not only by hunger, but above all by malnutrition. Bioeconomy helps to provide more nutritious and safer food.”

The successful further development of the bioeconomy is also due to changed consumer behavior, which increasingly demands bio-based products such as vegan leather alternatives made from plant residues. The aim of the bioeconomy is not only to develop sustainable processes and products, but to equip them with completely new properties. “But all this is only possible thanks to science. It forms the basis for a holistic restructuring of the economic system. This makes it all the more important to support science, especially in times of crisis,” says Council member Elspeth MacRae from New Zealand.

The Council appeals to policymakers to strengthen bioeconomy development worldwide, in particular to exploit the potential of life sciences and digitization and linking them. They argue that promotion of jobs in the bioeconomy is an opportunity that needs new educational programs. Further priorities are the mobilization of financial resources for the development of the bioeconomy, more involvement of industry and business, resilient chains, and to involve consumers much more closely through information and incentives. The Council is convinced that the Bioeconomy Summit should continue to be held every two years. The first summits were organized by Germany in 2015 and 2018. The dynamics of the bioeconomy have now increased worldwide and this provides an opportunity to take the summit to other regions of the world.